“After silence, that which comes nearest to expressing the inexpressible is music.” 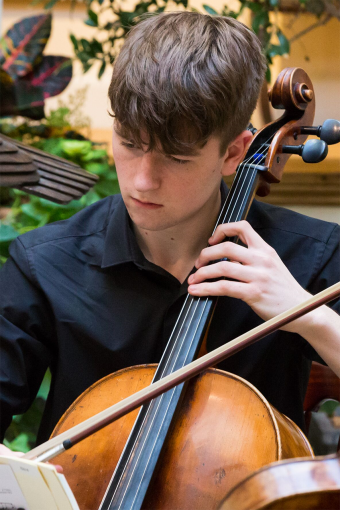 Dan Brandon is an 18-year-old cellist from Epsom, studying with Prof. Leonid Gorokhov at the Hochschule für Musik, Theater und Medien Hannover. Previously, he had been studying for the last four years at the Royal College of Music Junior Department (RCMJD) with Michal Kaznowski. In 2018-2019, he was the Principal Cellist in the National Youth Orchestra of Great Britain and the Stoneleigh Youth Orchestra. He won the Freda Dinn & Ida Mabbett Prize, the Ruby White Prize and the Chamber Music Prize whilst at the RCMJD and was recently given an award from the Poole Arts Association to contribute to his further studies. In the last year he has performed the Dvorak and Saint-Saens concertos in London and will be performing the Elgar and Dvorak concertos in the UK in early 2020.  Dan has performed a number of recitals, most recently in the Elgar Room at the Royal Albert Hall, the Purcell Room, Shrewsbury & Poole and has taken part in international masterclasses with Alexander Baillie, Colin Carr and Leonid Gorokhov. Dan plays on an English cello kindly loaned by the Benslow Trust.